Just for a bit of 'lock-down fun', Cambridge Bird Club organised a 12 hour 'Bird Race' on Easter Monday.  The aim was to see, or hear, as many bird species as possible in a 12 hour period, from 6am to 6pm - and strictly observing lock-down rules - so only birds seen in the garden, or on a short local exercise walk were allowed. Definitely no driving or cycling to a handy local RSPB reserve!!

Many CBC members, including Andy M took part, updating their progress in a light-hearted way on the CBC blog 'Cambirds'.

Andy M got up early, just after 6am, only to find it was raining - and nobody really likes birdwatching in the rain do they - so he went back to bed!  Lucky, after an hour or so the rain abated, and although it was still somewhat cold and windy, he set off taking in as many different habitats as possible in a short walk around Great Abington. Firstly through Sluice Wood, alongside the river, then down some of the roads and footpaths on the former Land Settlement Association, and finally along the Old Railway Cutting, then back home to keep a look out for anything different in his garden.

Andy managed to see 43 species altogether - highlights being a Kingfisher which handily flew by along the river near the sluice, a Willow Warbler singing joyously on the edge of South Grove, and a Little Owl seen near the nest site it has used for several years now.

Shortly after 6pm, lists were submitted to Louise the CBC Bird Recorder for scrutiny, and next day - the results were in! A total of 32 people took part, from right across Cambridgeshire, with a total of 95 different species being recorded.  Individual scores ranged from 18 to 75 (!) species, with the average being 39 - so Andy M felt pretty happy to be in the top half!

Interestingly, at this time of year, the species list showed an interesting mix of the last winter visitors, like Fieldfare and Redwing, and the first summer visitors like Swallow, House and Sand Martins, Nightingale, Yellow Wagtail and quite a few Warblers.  An Osprey was also seen!!  A couple of somewhat dubious species were also allowed - Peacock and Harris' Hawk - but only because it was just for fun!!

For those interested, the the full list of recorded species is shown below, with those seen by Andy M in bold: 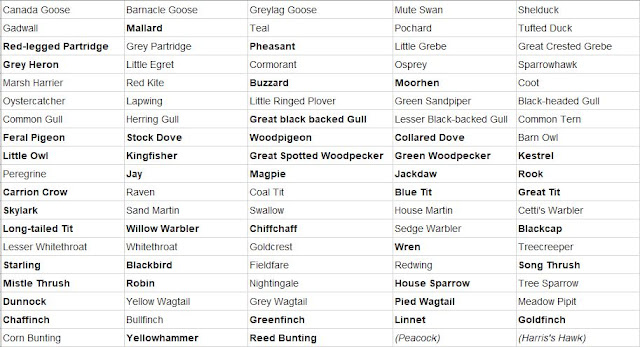