September 2021 - Interesting Sightings from around the Abingtons

A few odd sightings of Common Frog on the LSA and Gt. Abington and a Common Toad also in Gt. Abington. No reports at all of reptiles. The season has been particularly bad this year and I can only think that the spring weather part contributed to this.


A quieter month in terms of numbers of reports, with a total of 270 reports received, containing 43 different species. A few species of summer visitor were still being seen until around mid-month, as well as a few Warblers, although these may now be resident birds.

Swallow – six reports of up to 4 birds, mostly flying low, feeding as they went, so most likely on migration. One nesting pair successfully produced three broods again this year. Last report on 20th.  House Martin – nine reports, often of large flocks of up to 30 birds over Lewis Crescent and Granta Park, preparing to migrate. Last report 15th. Swift – no reports this month.

Kingfisher – single bird flying under the the road bridge on 5th.

Chiffchaff – several reports from gardens on Cambridge Road and Lewis Crescent, as well as on GP.  Blackcap – single report of an adult female feeding in undergrowth on GP.

Barn Owl, Tawny Owl – two reports each of birds calling during the night.

Greenfinch – good numbers (up to 20) regularly on feeders especially early in the month, with flocks of 15-25 Goldfinch also seen regularly. Smaller numbers of Chaffinch (1-2) more occasionally.

Pied Wagtail – more frequently reported from several sites, with up to 40 feeding on the GP cricket field, accompanied by 3 juvenile Yellow Wagtail on 8th.

Great Spotted Woodpecker, Green Woodpecker – three reports each at several sites, and one of a Nuthatch visiting a garden feeder on High Street, LA.

Buzzard – fairly frequently seen and heard calling over the village, sometimes 4-6 soaring high up whilst travelling through. Kestrel – one report on Cambridge Road, and Sparrowhawk, two reports from LSA and Lewis Crescent. No reports of Red Kite this month.

Robin – regularly heard singing as both males and females mark out their winter feeding territories.  Dunnock, Wren and Song Thrush – also all regularly reported in gardens.  Starling – small flocks (up to 40) starting to gather and move around together, particularly towards dusk.

Jay – 1-2 increasingly seen in some gardens, especially those with oak trees nearby, as the birds busily collect and stash acorns.

Butterflies, Bees and other insects

September has also not been a good month for invertebrates, especially butterflies, this year with 61 reports of butterflies in total.  The weather in September was very variable and quite a lot of rain. Total number of reports 88.  Butterfly reports were dominated by Small White and Red Admiral.

All reports are from within the boundaries of Great and Little Abington. Note the numbers given are the number of reports of a species received, not the number of individual insects. 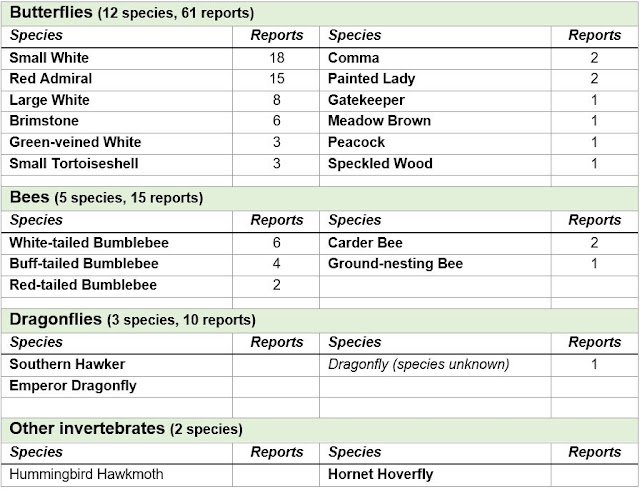 Bat – regularly seen in a Cambridge Road garden up to 21st,  also one in a Westfield garden clinging to garden parasol.

Hare – one young hare seen by Illumina in Granta Park on 6th.

Hedgehog – droppings were seen in a Meadow Walk garden during September.

Mole – reappeared in a High Street garden.  Also much evidence on the Recreation Ground.

Muntjac –one seen in Sluice Wood on the 8th, one seen in a Cambridge Rd garden on 21st, and one heard in Abington Woods on 29th and 30th.

No specific reports this month.

After a rather poor result from our August sampling session, with low numbers of several species, we repeated the exercise on 3rd September with help from Ruth Hawksley of the Wildlife Trust.

With very careful counting of the smallest creatures, we just managed to pass our threshold. There is a new Extended Riverfly sampling with many more species to report but it did not seem a good time to try that. We did buy the new guide for info.

No further river sampling is planned this year.

Another strange month with 74.5 mm of rain, 41mm of which fell in one day on the 14th! The highest temperature was 27.3 degrees C on the 18th with ten days of temperatures in the mid-twenties, a true Indian summer.

Many thanks to all those who contributed reports of their sightings for September 2021:

Earlier in September, on a sunny evening, the dragonfly that had been patrolling Andy M's garden continuously all day, finally came to rest on a sunny wall, giving the chance for a good look at it.

It turned out to be a female Southern Hawker dragonfly, distinguished by the bands of solid colour encircling the last two body segments (other species have a broken band or paired spots of colour), and a pale narrow inverted triangle on the first segment behind the wings.   Lovely to get such a good view! 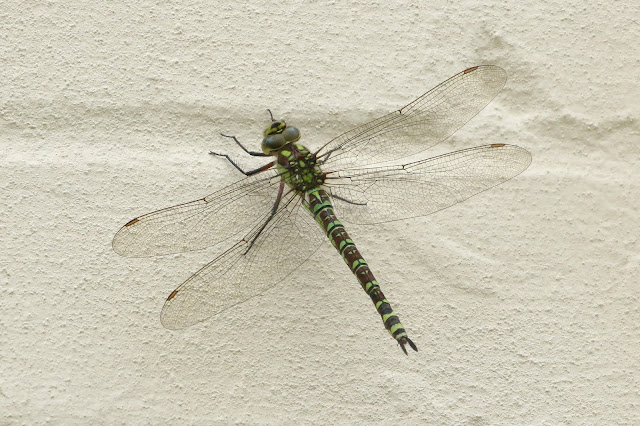 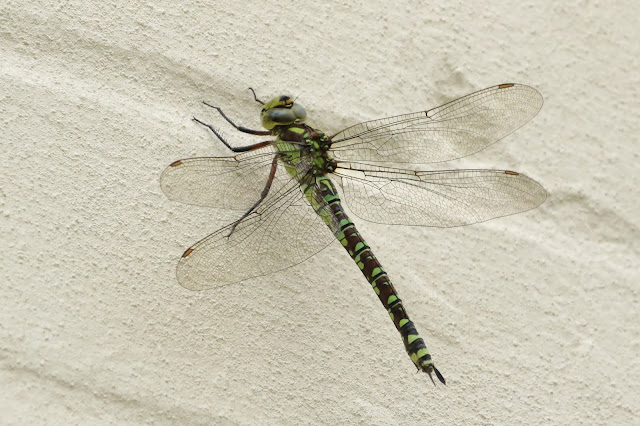 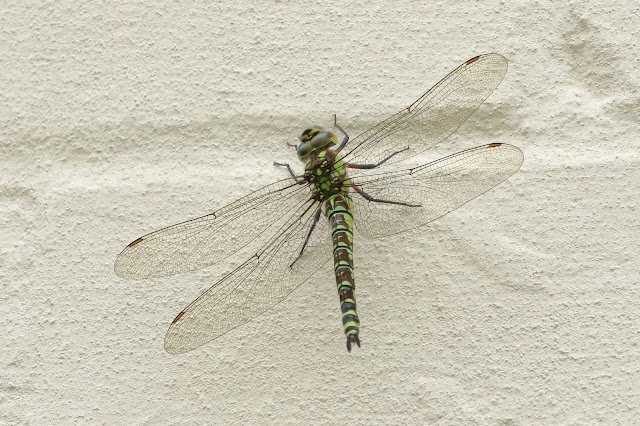 Carole M spotted a couple of different types of caterpillar 'decimating' her germanium and hosta plants.  One type was stripy and hairy, and maybe the caterpillar of the Large White butterfly - although they are more commonly found eating brassicas. The other browner caterpillar, with lines of 'eyes' down the side, has so far evaded identification!  Any ideas? 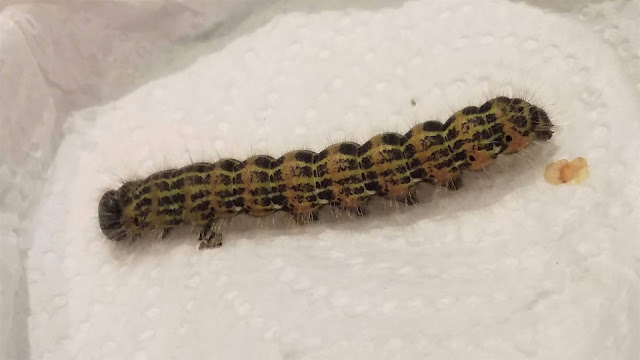 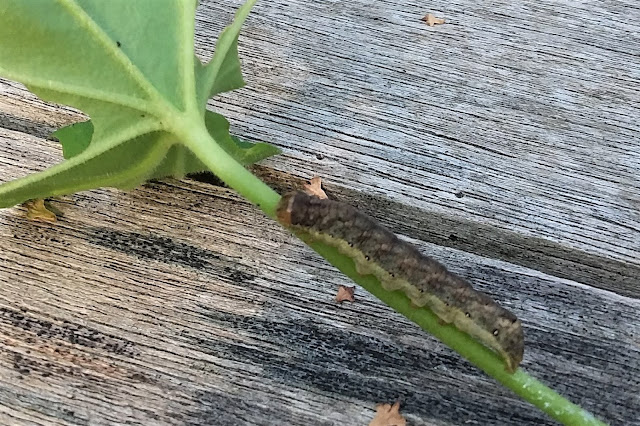 Following up on her recently reported Wasp Spider along the Protected Road Verge on Bourn Bridge Road, Justine U has spotted some 'further developments' ... Mrs Wasp Spider has been busy building a nest!! 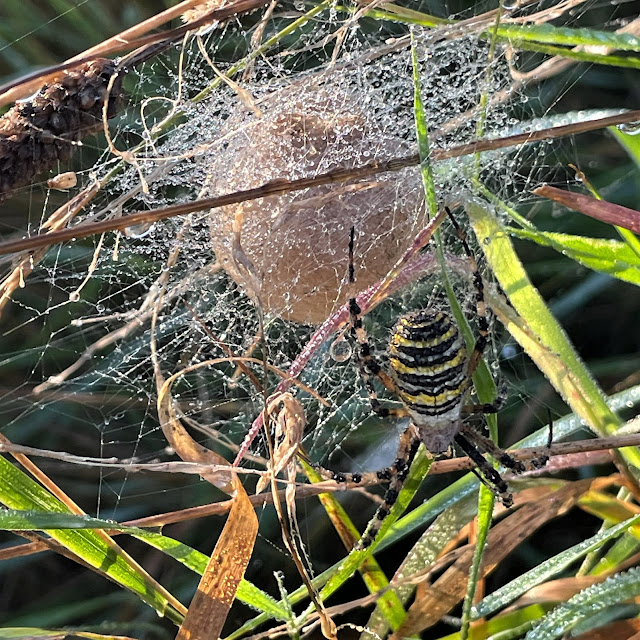 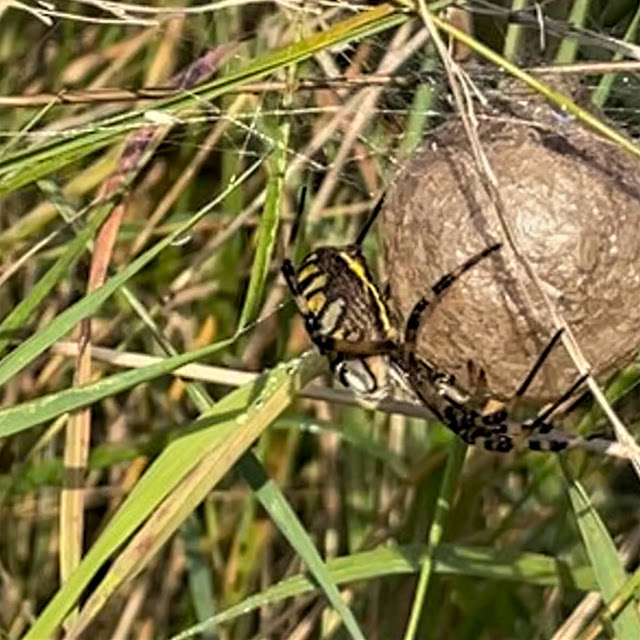 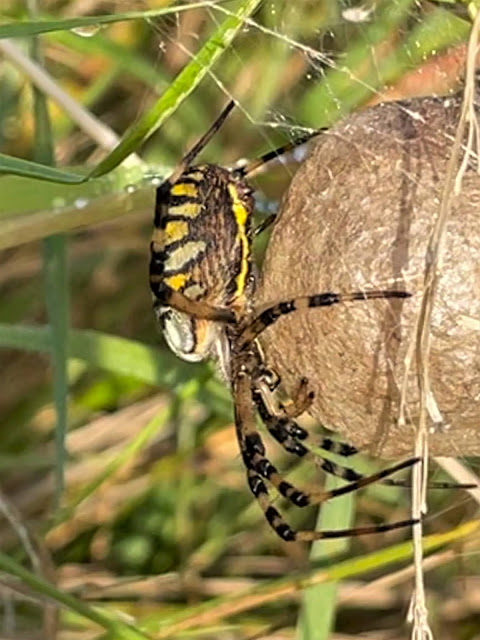 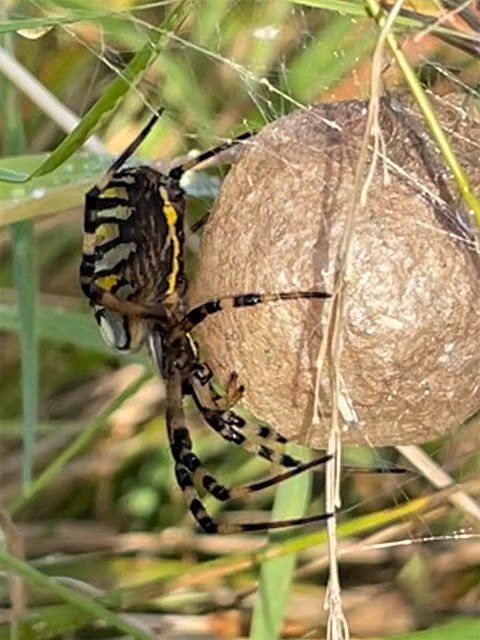 Justine U recently found this rather well-camouflaged Common Toad - one of only a few reported recently. 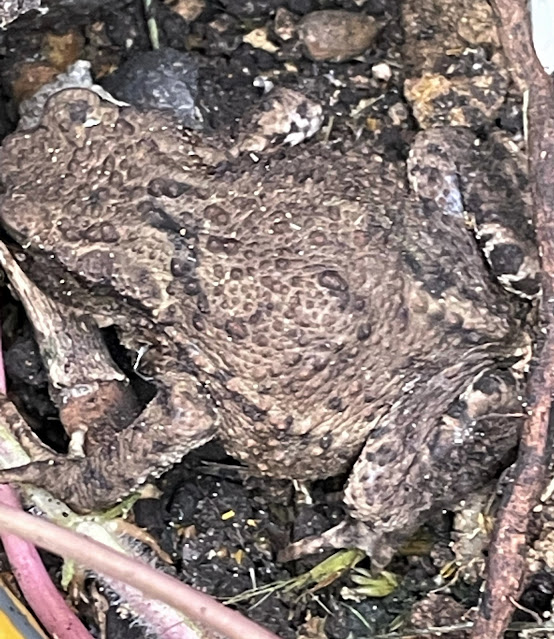 A couple of spiders

Sheena F sent in these photos of a couple of spiders that caught her attention. 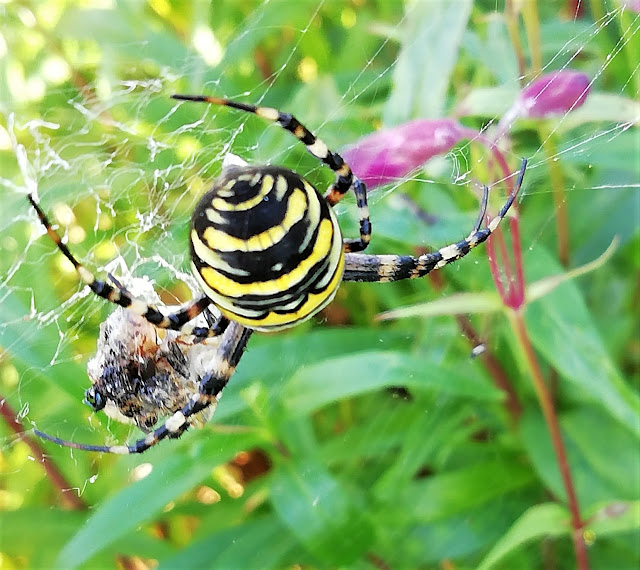 Rear view of a Wasp Spider - possibly it's best side! 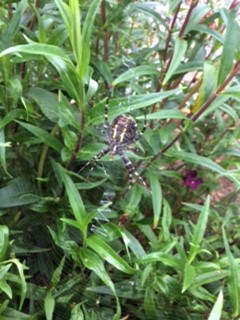 Possibly a species of Orb Weaver Spider
Posted by Andy M at 21:10 No comments:

August 2021 - Interesting sightings from around the Abingtons

August is typically a quiet month for birds, with many recovering from the efforts of breeding, quietly feeding and moulting. Larger flocks of young birds were again widely seen, particularly of Blue Tit and Great Tit, but also Long-tailed Tit, Goldfinch and Greenfinch. Of the summer visitors, a few Warblers were still around, and a few local Swallow and House Martin continued to be seen, as well as one late and very fortunate Swift. A total of 285 reports received this month, containing 49 different species.

Swift – one bird found trapped in a mass of cobwebs in LA church, unable to fly. Once rescued and cleaned off, it seemed unharmed and headed off on its somewhat delayed journey south. Likely to be the last report this year (15th). House Martin – regularly up to 4 over Mortlock Gardens and Cambridge Road.  Swallow – four reports this month, with a group of 6 comprising adults and young along Chalky Road.

Hobby – one seen pursing a flock of migrating House Martin over Lewis Crescent on 23rd. Regular sightings of 1-2 Buzzard, particularly around Lewis Crescent and the LSA. More occasionally, a Kestrel and a Red Kite seen around Cambridge Rd, and two reports of a Sparrowhawk.

Blackcap and Chiffchaff – 1-2 heard and seen occasionally at several sites, and Common Whitethroat reported twice along the ORC.

Chaffinch – small numbers occasionally in gardens, alongside the more regular larger groups of 6-10 Goldfinch and Greenfinch.  Regular reports of Robin singing throughout the day, as both males and females start to set up their winter territories.

House Sparrow, Wren and Dunnock – seen regularly in a few gardens, a Song Thrush occasionally on the LSA, and one report of a Jay along Cambridge Rd.  Collared Dove, Stock Dove – 1-2 regularly seen under feeders in some gardens.

Green Woodpecker – 1-2 reported in a number of gardens and the LSA this month. Great Spotted Woodpecker – a group of 4 adult and young birds seen in a Cambridge Rd garden, with 1-2 elsewhere. Nuthatch – 1-2 continued to visit in a garden on High St, LA.

Yellowhammer, Corn Bunting, Reed Bunting, Linnet – small numbers (2-8) on the ORC and LSA, as well as Skylark – up to 8 singing near AbPkFm.

Grey Wagtail – two juveniles drinking from a puddle with a Linnet flock near AbPkFm.

Little Egret – one along river in Sluice Wood (16th), and two reports of a Grey Heron along the river.  Moorhen – two seen by a garden pond on Chalky Rd.

Butterflies, Bees and other insects

August has again not been a good month for invertebrates, especially butterflies, this year with 154 reports of butterflies in total. The weather in August was very cool and few sunny days. Total number of reports, 202 (very low for August).

Butterfly reports were dominated by Small White and Brimstone (19 sightings), followed by Gatekeeper, Red Admiral, Large White and Peacock. Relatively few reports of Bumblebees, that are normally seen in greater numbers at this time of year. Similarly, very few reports of dragonflies.

All these reports are from within the boundaries of Great and Little Abington. Note that the numbers given are not the numbers of butterflies and other insects but the number of times a species was reported by someone. 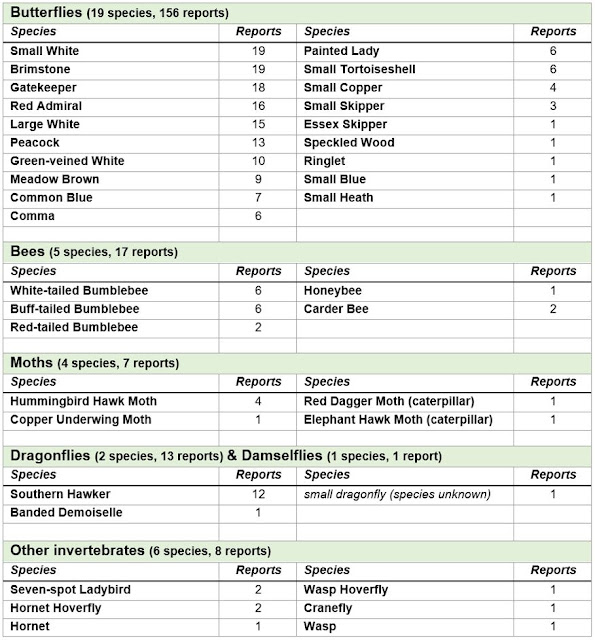 Muntjac – one on ORC on 4th, and one in a Cambridge Road garden regularly during the month.

Fox – one seen crossing North Road on the LSA.

The river fauna was sampled on 17th but just failed to reach our minimum ‘threshold’ count, and ideally we would immediately re-sample and recount. Although we knew the results were poor, we did not notice the breach immediately so we arranged a follow-up session. Ruth Hawksley from the Wildlife Trust came over on 3rd September and we tried again. The numbers were just adequate, although the sample seemed hardly any better.

The examination was certainly very thorough, using a hand lens, and we (mostly Ruth) identified various caddis fly larva, among others. The caseless ones were tiny and the cased ones only slightly bigger - a matter of spotting a likely collection of bits and waiting for a head to pop out!

A few Himalayan Balsam plants were removed, in addition to the usual litter-picking. We are aware of a tumble drier drum in the river and await a suitable opportunity to remove and dispose of it!

Typical school holidays weather - not a lot of sun and plenty of grey skies, but fairly dry with 33.25 mm of rainfall. The highest temperature was 28.2 degrees on the 4th and the lowest 6.9 degrees on the 29th. Overall it was a very quiet month with light breezes.