The first Holly Blue Butterfly of the season was seen on 3rd April by Lois B.

Jennifer adds: ANW records indicate first sightings of Holly Blue in the village were also in early April over the last couple of years, but were later in the years before that:


Wings are bright blue. Females have black wing edges. Undersides pale blue with small black spots which distinguish them from Common Blue. The Holly Blue is easily identified in early spring, as it emerges well before other blue butterflies. It tends to fly high around bushes and trees, whereas other grassland blues usually stay near ground level. It is much the commonest blue found in parks and gardens where it congregates around Holly (in spring) and Ivy (in late summer). The Holly Blue is widespread, but undergoes large fluctuations in numbers from year to year. It has expanded northwards in recent years and has colonised parts of midland and northern England. 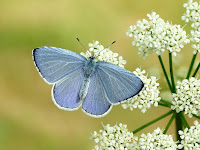 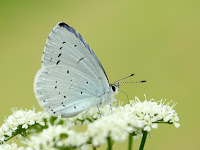