Last weekend (Jan 20th) Andy M noticed that a slightly different redpoll had joined the regular group of Lesser Redpolls on the feeders.  Very similar in many respects to the regulars, and sharing the characteristic red forehead and black bib, this new visitor was noticeably paler than the usual redpolls.  Recognising the wide variation in redpoll plumage, Andy emailed a detailed description and photographs to the Cambridgeshire County Bird Recorder, who confirmed the new arrival as a Mealy Redpoll.  Many older books considered these to all be variants or races of the Common Redpoll, but in 2001 two distinct species were recognised - namely Mealy Redpoll (Acanthis flammea) and Lesser Redpoll (Acanthis cabaret).

The Mealy Redpoll appears generally paler, and slightly larger and more 'fluffed-up'. Underparts are more white (rather than buff), with only a few small diffuse streaks on the flanks and, in this male, a pale pink-red breast and throat.  Upper parts appear more greyish-brown than the Lesser Redpoll, with a distinctive white 'tramline' down the centre of the back.  The wings are longer, with wing bars appearing broader and white, rather than buff, and the white rump is often streaked with pale pink.  An interesting addition to the winter flock of mixed finches and redpolls. 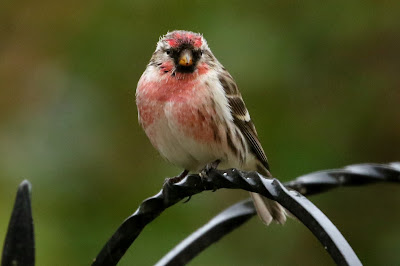 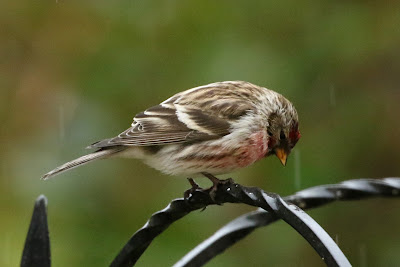 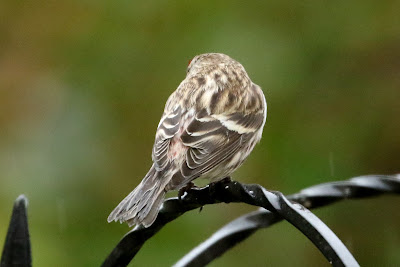 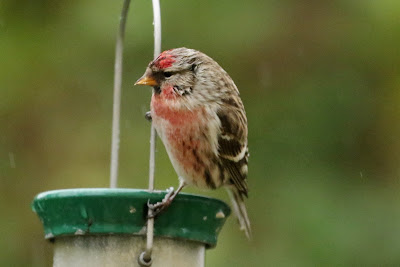 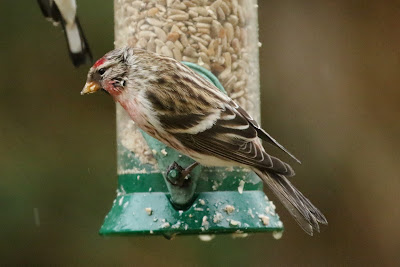