David P was lucky enough to spot a rather rare bird in the river on Saturday morning - a 'first' for The Abingtons!

A large but elusive bird, roughly the size and shape of a heron, with characteristic black, brown and buff streaked plumage, a long 'dagger' bill, and long neck and legs, this Bittern was spotted lurking in the undergrowth along the edge of the river by the cricket ground.  Being a shy bird, it didn't stay long, and after a short period, flew off over the High Street along the river towards Linton.

Until recently, the Bittern was extremely rare in the UK, with a few as eleven birds nationally in the 1970's.  However, thanks to a sustained effort by conservation organisations, the number of breeding sites in the Cambridgeshire fens has now increased to around 20-30.  Unobtrusive, and only rarely seen, Bitterns breed only in large reedbeds and are seldom seen away from this environment in the breeding season.  However, later in the year both adults and young may disperse somewhat, and there generally are a number of records of sightings in South Cambs during the 'winter season', although again these are largely associated with reedbeds or gravel pits.

Never previously reported in the Abingtons, one can only assume that this was one such 'travelling' bird, that saw the Abington river as a convenient stop-off point. 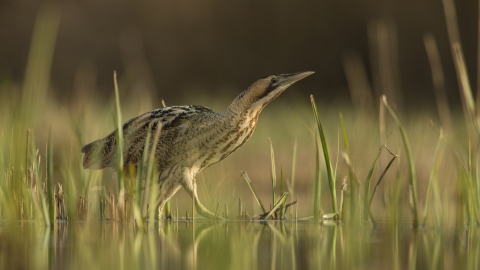