As part of the Abington NatureWatch Bird Survey over the Bank Holiday weekend, Marion R reported seeing a Spotted Flycatcher in her Little Abington garden.  First of the year!

Marion used to regularly see Spotted Flycatchers in her garden, but this is the first one to visit for some years.  She reports seeing the bird again since, and so maybe it will stay around and nest.


You may recall from Michael Holdsworth's very interesting talk on this subject at our spring meeting, that Spotted Flycatchers are in decline across the UK, and he is undertaking research to try and understand more about this problem. To that end, Michael would very much like to hear about any sightings of Spotted Flycatchers in the village - so if you see one, please notify Derek and Andy as soon as possible, so we can verify and pass the message on.

Spotted Flycatchers are apparently rather drab birds, lacking any bold plumage colouration, being a dull brownish-grey above, creamy-white below with feint streaks on the upper breast, with relatively large black eyes, and a narrow pointed bill.  Being around 14cm in length (about the size of a House Sparrow), they appear slim and typically perch with an upright stance. Their behaviour however is anything but dull, as they will typically fly out from a high perch to catch small insects in mid-air, returning to the same perch. Typically they catch insects such as moths, butterflies, damselflies and craneflies. 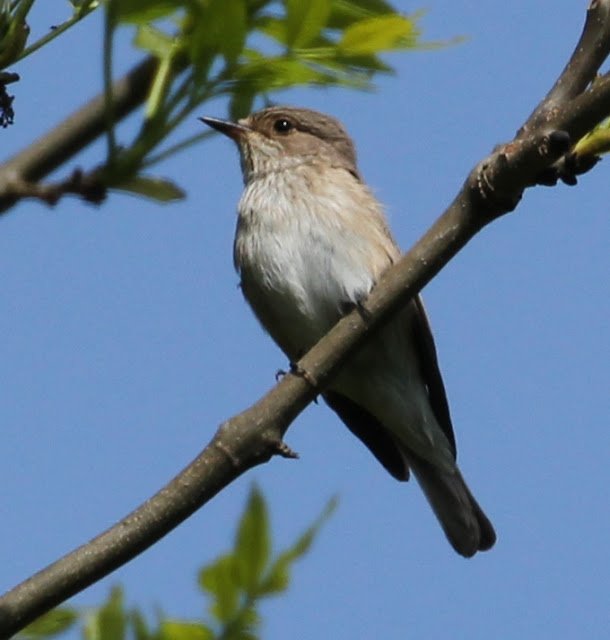