News - Goosander seen for first time in The Abingtons

A female Goosander was seen flying low over Granta Park, heading east towards Great Abington.  Excitingly, this species of duck has not been reported before in the Abington parishes.

Goosander belong to the 'sawbill' family of diving ducks. Breeding mainly in Scandinavia and northern Russia (and occasionally in Northern Britain), Goosander migrate south in winter, which they spend in northern Europe including the UK, most often on inland lakes or along the coast.

Andy was unable to take a photograph of the bird seen on Thursday, but below is a female Goosander from BirdGuides - Sawbill Photo ID guide
https://www.birdguides.com/articles/identification/sawbill-photo-id-guide/ 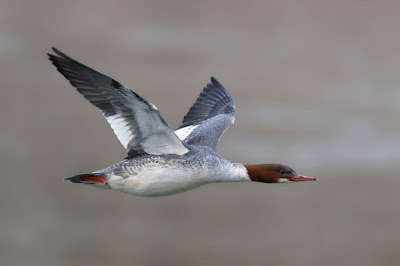 The male and female Goosander appear very different. A large duck, some 60-70cm long, with a wing-span of around 80-90cm. The female has a long red bill, and a chestnut-brown head, sharply distinct from a long pale neck which is extended when in flight. Underparts of the long body are pale, with a darker back, and the long, narrow, pointed wings have a clearly visible block of white on the inner wing, contrasting with darker wingtips. The flight is fast and direct, on stiffly-held wings with a rapid, shallow wingbeat.
Posted by Andy M at 16:09