Anne Dunbar-Nobes writes:
The cold and snowy weather brought two Reed Buntings to our garden over the weekend (23-4 March). Apparently Reed Buntings will leave their reed-bed habitats in the winter and move onto farmland, and in tough weather they are occasionally seen feeding in gardens. These Reed Buntings were feeding on seed on the ground under the hanging feeders and were seen throughout the afternoon on both days. The photos are of the male with the distinctive black head; the other had sparrow-like streaky brown markings, with a distinctive pattern on its cheeks, so presumably the female. 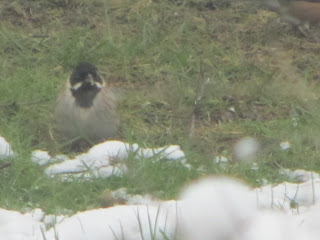 While I was waiting to take a photo of them, a Treecreeper suddenly appeared on a Silver Birch tree in the background, so I snapped that too!

Treecreeper on silver birch in snow