Although there was still a good amount of water, our findings over five attempts were surprisingly poor, one of the poorest ever - the persistently cold winds and nights presumably the cause of this. Populations were everywhere low and diversity hardly impressive. Apart from one mayfly larva at the third sampling, specimens were again small. At the Ford the relative abundance of beetle larvae was a feature as last time, as also were the limpets on one rock.

We sampled at 3 sites: the Ford, the Football Reach and by the Millennium Bridge. 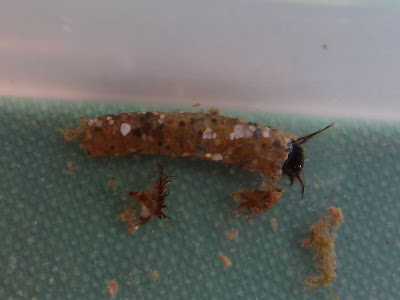 Caddisfly larva
Posted by PeterB at 00:26